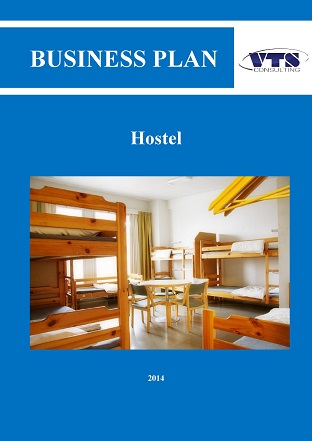 The total area of hostel is 880 sq. m, the amount of above-ground floors is 5 and the amount of underground floors is 1. The building of administrative type has a cabinet layout, mixed overlays (height from one overlay to another is 3.0 m), fire alarm, surface parking and telecommunications.

Location of the hostel

The future hostel is situated in Presnenskiy district of Moscow which is *** from the nearest metro station *** and *** accordingly, many minibuses run down the street. The disadvantage of the district is the heavy workload of transport routes, which leads to numerous traffic congestions, and it is better to use the metro as a relievable   means of getting to the destination. The hostel has a low level of transport accessibility.

More than *** hostels for over *** sleepers are functioning in Moscow. The share of hostel is about ***% of the total hotel market of the capital. The total number of people accommodated in the city hotels was *** mln. according to the results of 2013. By the forecasts of Committee for Tourism and the Hotel Industry of Moscow, thanks to adopted stimulus measures the number of tourists visiting the capital would increase to 14.8 mln. a year till 2025.

The main source of attraction of clients to future hostel will be a web-site ant it is planned to use the following internet marketing tools: search engine optimization (SEO), contextual advertising and social media marketing.

Two scenarios of project development and three variants of risk situation are considered in financial plan.

After the analysis of technical and economical characteristics of object and its location it is possible to make conclusion that the convenient territorial location  creates an visible advantage, because the building is situated relatively close to that showplaces, which all visitors prefer to view.  The proximity to Kiev railway station, Moscow metro stations «Mayakovskaya», «Barrikadnaja», «Krasnopresnenskaya» allows getting to any point in Moscow.