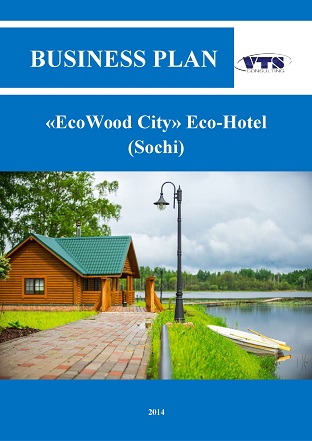 Project Idea: construction of eco-hotel (complex) on the territory of Krasnodar Krai (Sochi), forest array. The construction is carried out by the unique technology with application of ecological buildings (houses cottages).

Key project idea: the opportunity of leaving in the environmental zone, among forest array, in secluded cottages where the sea view is opened from windows of each of them.

Residential buildings of the complex: houses-cottages of «Futteralhaus» company (Germany) production. Amount of houses on lot is 20. «Futteralhaus» are the mobile compact energy efficient and environmentally friendly houses. They are made from natural materials and available for year-round living of family consisting of 1-6 members. Ecological friendless of construction means the usage of natural and simply materials only which are available for secondary processing.

Uniqueness of project economy. The cost of one cottage amounts to 22 thsd EUR, which is lower in 14 times then the cost price of construction of one hotel room in this region.

The project uniqueness will mean the same distance from Sochi, Krasnaya Poliana and Olimpic cluster in Imeretinka (the territory with highly developed infrastructure).

In the Adler district the sanatorium sphere of service is developed. A large number of sanatoriums and pensions, private hostelries and guest houses is offered for tourists.

The base of productive forces of Krasnodar Krai are the industrial, construction, fuel and energy complexes, field of information and communication technologies as well as agriculture, transport, tourist, resort and recreation complexes. The last three directions (agriculture, transport, tourist, resort and recreation complexes) are appropriate for the social and economic development of Russia and determine the especial status of Krasnodar Krai and country economy.

The natural and climatic conditions of the region which are unique for Russia, presence of advanced medical facilities and technologies, historical sights create the potential for development of highly-efficient, competitive tourist and recreational complex of international level which forms the positive image of the country in the international arena and provides the increasing needs of population in services associated with the rest, treatment and tourism:

The leading industries by attracted investments are transport and communications, agricultural, sanatorium and tourist complexes which determine the priorities of regional economy.

Components of the hotel:

Due to the construction and competent planning the house consumes very little energy for hitting and in the autonomous version can be completely energy independent.

In 2013 Sochi was visited by *** mln people, and in 2014 through the Olympiad and implementation of deferred demand the increasing of tourist flow is expected by 30%. It can lead to straightening of competition among hotel operators.

Approximately *** means of accommodation with total number of rooms about *** thsd were constructed by the Olympiad. Herewith *** hotels and sanatoriums are classified (*** thsd of rooms) in the city. Thus, through the Olympiad the total number of rooms of Sochi was replenished by more than 60%, which is a significant growth for such short period.

Twenty developed and reconstructed by the Olympiad hotels belong to categories of 4* and 5*, herewith *** of them is under the management of international hotel operators.

During the assessing of this investment project two scenarios of implementation were used: pessimistic and optimistic. The distinction among scenarios is concluded in offering of different occupancy of hotel rooms, and accordingly, the calculations were performed under the new indicators. Thus, the average annual occupancy at the pessimistic forecast amounts to ***%, at the optimistic – ***% of maximum possible.

During the process of project estimation its accordance to the different criteria of acceptability was verified and also the analysis of its basic parameters and variants was performed.