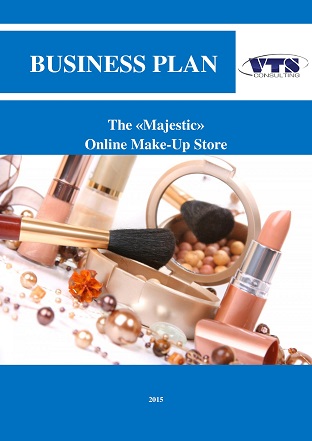 Creating of the «Majestic» make-up online store of luxury, business and economy classes. Online store will combine a high quality of production, plenty payment methods, system of delivery in convenient time for client, possibility of pickup of goods. On the «Majestic» website, a user would find the production of long-time favourite producers for Russian consumers as well as those brands, which have proven themselves abroad, but have not been represented on Moscow market yet.

Registration of online store requires the purchase of a domain.

Connecting the «Robocassa» service will allow accepting the payments made by 40 methods.

Audience of the project:

The Russians living on the territory of Moscow and Moscow Region, predominantly women aged 20-55 years (the core target audience).

Russian consumers are inclined to buy cosmetics of proven brands. The leaders on cosmetics and perfumery sales in the Russian Internet environment are the main players of cosmetics market in the country:

One of the advantages of the foreign online stores, which deliver the production to Moscow and Moscow Region, is that they allow purchasing cosmetics of that brand, which have not been represented in the capital yet. Among them:

A modern consumer becomes more demanding and discerning, besides he doesn’t always have enough time to visit a number of shops searching for the goods, which met all his wishes.  This is one of the reasons, why it is possible to buy practically all goods in the Internet today.

According to the experts, the World Wide Web is the most modern and perspective form for sales of cosmetics and perfumery. Exactly online stores are the first to respond to emergence of new seasonal items and update of popular line of products by consumers’ favourite brands. Cosmetics and perfumery market is one of the most mobile and regularly update, that’s why it constantly offers the new aromas, decorative make-up, care products and other.

It is important to say that development exactly of e-commerce has become the reason of reduced sales volumes of those companies, which work on the principle of direct sales (Oriflame, Avon, Mary Kay are among the Russians leaders) that indicates a partial exemption of their market niches, which can be taken by new projects on sales of cosmetics production in the Internet environment.

According to the prior estimates, the growth rate of market of cosmetics and personal care products in 2014 has amounted to 7%, reaching the level of               495 bln RUB. Analysts say, the market has not reached its potential volume yet and will close to it likely in 2016-2017, accounting for 4-5% of world sales of cosmetics sales.

According to the investigations, 93% of consumers consider that purchase of cosmetics and perfumery in traditional outlets is convenient; at the same time, 46% of their total number affirm that online buying is equal to offline buying by the criterion of convenience. Besides, 12% of respondents prefer to buy cosmetics only in online shops. An interesting fact is that the share of men in the total audience can reach 34% in various online stores. Potential audience of this project will amount to 1.88 mln people.

The monetization principle of cosmetics stores is rather simple – it is based on markup, which cosmetics distributors add to purchase price of commodity unit.  The size of markup depends on status of supplier – producer, official representative of the producer in a region or wholesale supplier. According to the managers of cosmetics stores, the markup often can amount to 150% of purchase price of goods. The difference between selling and purchase price allow defraying the costs of advertising, rent of retail space for goods demonstration and personnel.

Need of online stores for retail space is much less – they require only small room as a warehouse of products for sale and also a workspace for manager-operator and   warehouse manager. This explains the reduced retail prices in online stores in comparison with prices in traditional outlets, which allow them to win in the competition by price methods.

According to the research of public opinion conducted in 2014, most often consumers call the following suggestions regarding the work of cosmetics stores:

This project is fully consistent with a last requirement in represented list, because it is planned to cooperate with the «Robocassa» service, which allows accepting the payments made in any of more than 40 ways by a final buyer.

The created project will differ from the already existing with the following.

In products catalogue the visitor can find the unique production for Moscow market, which is still hard to be found and often cannot be found in specialty stores. First of all, it comes to cosmetics produced abroad; for example, Israeli and Japanese cosmetics become more popular in the world (contact information of official representatives and wholesale suppliers can are provided in appropriate chapter of the business plan).

Besides, the online store is focused on formatting the image of original products distribution. It means that it will not sell the copies of famous brands’ production, and even those of them, who are produced under license and largely repeat all qualities of the original.  Every buyer could ensure the genuine quality of products at the moment of delivering – he may unpack and test the goods independently before the payment for purchase.

Several dozen of middle level stores have about 30-40 orders a day. It is planned to lead this business to such indicators already during the *** year of implementation.