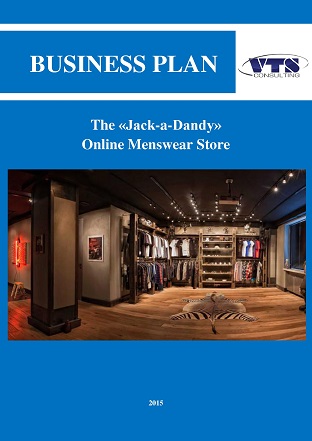 The project is focused on opening of online store of trendy clothes, shoes and accessories and panache articles as well for young and energetic men, the main suppliers of which will be the Turkish producers; it will provide the quality of fabrics and sewing and also allow attracting and keeping the customers by competitive prices.

Registration of the online store requires the purchase of domain.

The Russians living on the territory of Moscow and Moscow Region, predominantly men aged 21-40 years (the core target audience).

In the modern world men pay no less attention to their appearance than women. Many of them are not just interested in fashion; they understand it and follow the latest trends.  Including it all, it is more difficult for them to select that store, which will meet all criteria simultaneously – their general lifestyle, features of the figure, income level, requirements to fabrics, etc.  The reason of it is rather prosaic – producers of menswear are quantitatively inferior to manufacturers of women's clothing and in sales outlets men’s lines mostly are additional, whereupon their assortment is limited.

Exactly due to the mentioned conditions, an online store focused exclusively on articles of menswear will attract attention of the target audience. Its specificity must create an atmosphere of a kind of gentlemen's club, where a man – potential buyer – will not be distracted by offers to purchase women’s or children’s things; a discreet website design would contribute to focus on that things, for which he has addressed here.

Growing middle class in Russia requires the decent assortment and service, but, as before, there are so little brands, which meet its needs. All goods will be imported from Turkey, where the cost price of sewing products is lower than west analogues’ cost price due to the cheap labour and domestic production of fabrics; that’s why such online store will take its niche in the unsaturated middle price segment.

Market of menswear makes a third of total volume of clothing market in Russia and accounts to *** bln RUB. So, according to the marketing researches, every man spends on clothing about *** RUB per year in Russia.

Despite the emergence of new competitive stores, the turnovers of trade enterprises are increasing in men's fashion market. According to the various estimations, annual sales volume of menswear increased  by **–**% during recent years, while the total growth of clothing market in Russia amounts to 5–7%, in Europe – 2–3%.

According to the experts, a boom in the market of men’s fashion would be expected in the future due to the e-commerce. Special popularity will pertain to such categories of goods as trousers, jumpers and other articles of men’s clothing, which do not require the careful fitting.

Also the positive tendency is the fact that uncivilized retail is rapidly losing ground exactly to e-commerce and chain retail. Modern consumer becomes more picky, selective and fastidious. 71% of the total number of online buyers consider that the online purchase of clothing and footwear is convenient because of time saving, no markups and also due to the opportunity to try things on during delivery and return them if they do not fit the consumer.

It is important to say that owners of online stores should pay a special attention to the assortment right now and develop a few directions simultaneously for success in the future. It is perspective to enter the market with interesting collections, not fall behind the fashion trends, because male population is interested exactly in fashion things, but not in remnants of unsold goods in of past seasons.

According to the analysis of competitors, online stores exclusively of menswear are not common. But in order to stand out among competitors, which include the menswear as well as women’s and children’s clothing lines, it is necessary to invest in the project promotion during the whole period of its implementation, and especially – in advertising in the Internet environment. The recommend ways to promote the business of this kind are the following: search engine optimization of the website, contextual and banner advertising on the pages of search engines, creating of communities and advertising in social networks.

One of the factors, which affect the decisions of the online store visitor about the purchasing the goods, is the accessibility of payment methods, which is the most convenient for him. That’s why, both cash settlement in the moment of delivering the goods by courier and cashless payments using credit cards and electronic payment systems are provided by the project. For this purpose, the project will cooperate with the «Robocassa» service, which allows accepting the payment from a final buyer by about 40 ways.