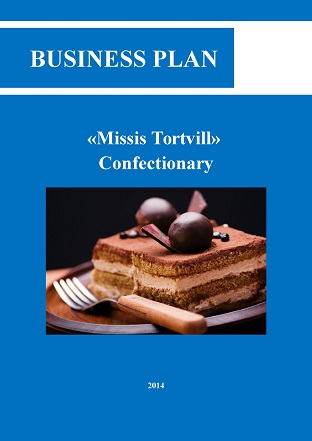 Project Audience: the main buyers of confectionary products are:

Project purpose is a startup of «Missis Tortvill» confectionary. The confectionary for production of bakery and preserved pastry goods will be organized in rent premises.

The confectionary is a full-cycle enterprise, i.e. includes all production processes from confectionary provisions forming to shipment of products to the sale or offer points.

For today in the market of confectionary and bakery industry the tendency for decrease of products demand is observed, which is associated with the population reduction as well as income growth leading to change of nutrition model.

So, on the territory of Russia *** mln t of bakery and confectionary production were made for the first half of 2013, which is less by 0,39% in comparison with the similar period of previous year.

In the same time bakery of low humidity (bagel products, rusks, toasts, crispbread) show a significant growth of production, the volume of which has increased by 17.42% in comparison with indicators of previous year and composed *** thsd t. Also the stable growth of chocolate and sugary producers is noticed, which has enlarged the volumes of production by 6.5% in comparison with previous year.

Today together with searching and development of new kinds of production and extension of the product range many producers restore the old recipes production. Besides, so-called ecologically clean food gains the increasing popularity among consumers. A modern buyer pays a great attention to quality of foodstuffs, considering their composition and terms of storage. Due to the results of the first half of 2013, the volume of bakery products of long-term storage showed the most significant decrease by 11.08 percentage points and composed *** thsd t against *** thsd t a year ago.

Preserved pastry goods are the products of every day demand. Almost 95% of consumers buy them (mainly cookies and gingerbreads) for daily tea. The main buyers of confectionery products are women of 30–39 years old (about 25%) and 50–65 years old (about 30%). 45% of buyers have school-age children, about 30% are accounted for children and teens under 18 years old, the rest 15–20% are accounted for men.