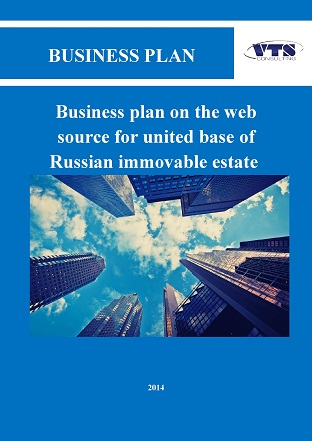 «VTSConsulting» company offers not only a prepared business plan: we sell the effective and practicable ideas for your business, starting from the ideas for Internet business to the different spheres of economics. Our clients get a ready, living idea and step-by-step instruction on its realization (business plan document itself), the currentness of which is proved by the market researches made by specialists of «VTSConsulting» company.

The project which is offered as an idea for the given business plan is a complex web source which corresponds to the interests of both sides - a seller and a client - in the sphere of immovable estate and is oriented, first of all, on Moscow and Moscow region. Due to the statements of analytics of the «VTSConsulting» company, this source is a unique base for russian immovable estate.

The latest data of the «VTSConsulting» company researches improve the perspectiveness of the project:

The given business plan can be adapted for analogous project around the world.

Description of the business plan

Situation on the market:

In 201* in Russia the area of housing feed was *** 200 thsd. sq. m. In the first quarter of 2013 the whole amount of dealings in immovable estate reached $ *** mlrd. The investments in commercial estate were dominating on Russian market in the first quarter of 2013. The largest amount of investments is concentrated in Moscow, that is ***% of dealings.

Financial constituent of the project:

Extracts from the research:

Analysis of the commercial immovable estate in Russian Federation

In the first quarter of 2013 general amount of dealings with immovable estate in Russia reached $ *** mlrd. which is larger on 104% in comparison with the equal period of the previous year. As a result, three months in 2013 became record among the first quarters of other years in terms of investment transactions.

The investments are mainly concentrated in Moscow - ***% of dealings.