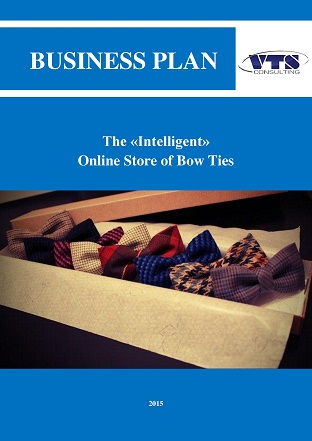 The project is focused on the opening of online store of trendy accessories – bow-ties as the core production, ties and pocket square as additional categories – for young and stylish men and women, which would like to stand out from the crowd and emphasize their individuality.  The project is based not on mass production, but on handmade bow-ties and custom tailoring. It would be difficult to find two identical items, because the amount of produced bow-ties of the same article will not exceed 20 units on the average.  That’s why the products offered in online store in some way can be called exclusive.

Registration of online store requires the purchase of a domain.

The articles especially for male costume as well as exclusively female models will be represented on pages of the website. However, most of the bow-ties will belong to universal, i. e., that can be adapted both to male and female attire. Also buyers will have an opportunity to purchase the bow-ties for children and adolescents to complete their festive image.

The goods offered in online store are absolutely handmade, that’s why the price will be higher than price of factory bow-ties, but significantly lower than for the design products; natural tissues will be selected for sewing; due to the mentioned factors, production will belong to middle price segment and be acceptable for middle-earning population.

Most of the largest online projects purely on sales of bow-ties started its activity in 2012. By the results of 2013, on a wave of fashionable trends, the growth of demand for bow-ties in various producers has amounted to 50-100%. However, according to the previous calculations, due to the increase of players’ amount in 2014, this indicator has already amounted to no more than 25-30%. With increasing competition, the players expend the range or offer even more niche product.

Every project (according to the data of market players themselves) sells on the average from ** to *** bow-ties per month, so payback period can be few months.

Demand for products is seasonal, in pre-holidays the amount of sols accessories can increase in six-eight times, in summer – decrease in comparison with annual average indicator.

Herewith, the production of many players is positioned as handmade varying degrees of exclusivity (from 1-2 to 10 exemplars of the same article). It should be mentioned that the bow-ties of Russian production as well as cheap products from Asian countries are represented on the market.

Entrepreneurs of this niche consider the bow-tie production as start for their business. They plan to produce several groups of goods in the future and even combine the related businesses, while keeping the main name and developing so-called umbrella brand.

An overwhelming majority of market participants already has commodity items, which are consimilar to bow-ties. They are: ties, suspenders, shawls,   bracelets, leather accessories with inlays of wood, which account for 50% of sales (the second half is formed by the bow-ties themselves). Many producers launch a line of women's accessories, such as stand-up collars and collars embroidered with stones.

Production of bow-tie producers is usually bought by young people aged 25-35 years (about **% of buyers), up to 25 (about **%) and over 35 (**%). About **% of purchases are made by girls (because exactly they are engaged in shopping in the main), but only **% of the total number of buyers are accounted for girls, who purchase an accessories for themselves.

In Moscow 8.35 mln inhabitants approximately are the Internet users, in Moscow Region – 3.09 mln; the share of those, who purchase the clothing, shoes and accessories online is 34.2%. Buyers aged 20-35 years account for 60% of the total number in the fashion segment. Thus, the potential number of audience is amounted to *** people.

Entrepreneurs call social media and the Internet advertising as the main communication and promotion channel, but players do not neglect an offline presentation of their products, for example, supply the anchorpersons of popular TV-channels with accessories or conduct the theme parties.