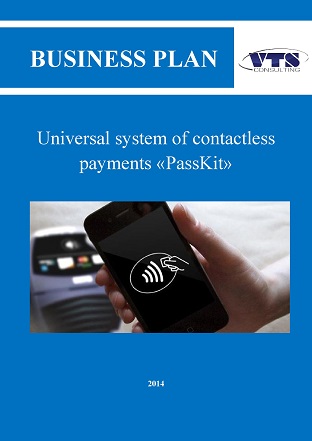 «VTSConsulting» company offers not only a prepared business plan: we sell the effective and practicable ideas for your business, starting from the ideas for Internet business to the different spheres of economics. Your clients get a ready, living idea and step-by-step instruction on its realization (business plan document itself).

The project offered as idea of this business plan is a web-site which represents an online-platform for creation of passes (passes – a digital card or ticket which replaces the physical analogues and consists of the same information, it is possible to send passes via MMS, Email, mobile application).

Among main possibilities of this platform is the opportunity of coupons, tickets, promotional coupons, discount cards and coupon certificates keeping in mobile phone of goods and services consumers. In the future the developers presume that user will be able to keep the payment cards in the system and carry out the transaction via their help.

The financial model in the separate file which allows to build with ease the new financial plan by method of input of the relevant data is applied to this business plan.

Project purpose: bringing to the market of Russia the «PassKit» project, which will be integrated with basic mobile platforms (iOS, Android, Windows, Blackberry).

Relevance to the business: an opportunity to attract the new buyers, reducing of costs for printing of advertising products and production of plastic cards. Besides, the online-platform will allow the companies to work with the most popular mobile wallets: Apple Passbook, Samsung Wallet, Google Wallet, Pass Wallet

Relevance to separate consumer: this decision will allow the consumers to forget about the wallet which is constantly full up by different cards and will provide a simple access to carrying out of transactions.

Experts forecast the further growth by ***% per year in average for 5 years. Considering the possible economic crisis, the projects look quite favorably.

It is possible to explain such growth by increasing of number of buyers.  According to the data, which are provided in the research of Association of Companies of Internet Trade (ACIT), *** mln people buy online. This is about ***% of total amount of Internet users. Herewith the growth in 2013 was ***% – about *** mln people. The basic growth is taken due to the regions and as the consequence due to the buyers with low income.

According to the research of Russian market of mobile Internet, the portrait of mobile Internet user was made, the most popular mobile platforms and models of smartphones were revealed and also the geography of mobile Internet penetration was studied. Most often the mobile versions of sites are visited via Samsung devices (***%), Apple gadgets (***%) are second, Nokia (***%) closes the top three. As for the operating system, the most of visitors of mobile versions of sites are the owners of Android based devices (***%). In the second place, iOS is (***%), in third place – J2ME (***%). 5% of visitors use the devices with Symbian operating system, 3%  –  with Windows Phone.